Take time to record your stories for those who come after you.

The last time I was at my grandma and grandpa’s house was in 1970, the year my grandmother passed away. My grandfather later lived with my aunt’s and uncle’s and a few short years later he passed away too. I never knew what happened to their place, if it sold right away or after grandpa was gone. I was young and since it didn’t involve me directly, it was none of my business, even though at a young age, I pleaded with my parents to buy it so we could live there. “It was only one state away, and our family was there, and Dad could work for the power company there”, was my reasoning.

This was the house, the place, where all the relatives  gathered. Where all the grandkids and great grandkids felt loved and safe and could just be kids. This is where imaginations grew and sisters and brothers laughed and shared and told stories about each other. The place where we learned the meaning of the word no, yes, please and thank-you and we were glad to learn it there. The one place that all of us cousins all felt the same about was grandma and grandpa’s house.

I went back there recently, to see if it looked the same or was even there. The first time I sent was 2 years ago with my cousin. What I remembered wasn’t there, the house was painted different, but the trees, the garden, the chicken coop, the fruit trees, the garage, the swingset, the roses, the flowers, the little bridge that crossed the ditch, the clothes line, fencing for the pasture, it was all gone.

The house is painted green, not the bright white. The garden area and the fruit trees made way for more farm land, a good use for it. The tall trees have been replaced with a pine tree and a couple of other  trees that have no leaves on them-it is winter. There is a metal fence, like a picket fence-sort-of, that surrounds three or four raised garden beds.  The roses and trees that lined the driveway are gone and it is so bare. But it is the way these folks want it and they are making their own memories together.

There was a nicely built garage where the chicken coop was, and its front east corner is right above the hole in the ground that grandpa kept his taters in. I only remember this, because one time while grandpa was watering the lawn with the irrigation ditch water, plenty of family was all there and he got panicked and realized he forgot to raise the

potatoes out of the ground and they were ruined.  He was more upset at himself for forgetting. (There were only certain days you could use the ditch water, and when it was your turn, you used it or had to wait until weeks later until it was your day again).

My husband, who was with me, I told him about sitting on the floor by the front window, early in the

morning and watching the crop dusting airplane dust the field across the road. It was such cool fresh air that came in the window and it was so peaceful. Sometimes my sister and I would both be awake and sit there and talk about what might be growing, and how fun it would be to fly an airplane and such.

I pointed out the coal shoot, and my husband saw the lid for it, and I remembered how once I played in it and got all black, and that was the only time in all the years there, that I did that. I talked about the chickens and fresh eggs. And by the propane tank- that looked like the same one- my dad helped my grandpa get his tractor running, we have a photo of it too, somewhere packed away.

That same area was where my grandmother stuck up for me when my dad began to scold me for sitting on the harrow while she pulled it over the garden. I tried to  tell him I offered to pull it, but grandma wouldn’t let me. Now, usually grandpa and grandma never interfered with the parenting of the grandkids, but this time she did and she told him, that she wanted me there for the weight so she could get her garden ready. My dad backed off and offered to pull it for her and I helped pull it. We found some heavy rocks and bricks to put on there.

I told my husband about my grandma playing croquet with all of us. She was so competitive. One time her ball hit my uncles ball and she wacked it clear out of there. My uncle was upset, and told her she didn’t have to hit so far out, but they just laughed and kept on playing. He knew when she played, it was for fun, but also to win. Her children were very respectful of her and grandpa. They not only loved each other, but knew that you didn’t back talk.

There were family reunions, grandpa and grandma’s 50th wedding anniversary, and the

relatives that stood up with them at their wedding, came from half way across the United States to be there. I loved to see them all together. They enjoyed each other’s company, talked about work, fun, and told stories about each other. They talked about what was current in their lives and the communities. They smiled and laughed and when it was time to depart they hugged and wished well and tried to keep the tears back and you could see how to love and care for people.

I talked more to my husband about the new swing set and sitting in the kitchen and grandma tying our braids with string and they would stay all day. How we used to catch swallowtail butterflies and get a far lid with some sugar water and feed them, then let them go. About the strings she would put on the outside of the window on the porch and the wild Morning Glories would climb up them and help shade the room from the summer sun.

I told my husband how grandma would pull out the wringer washer and take it outside on warm days and do the wash early in the mornings. How the lid lifted sideways off the floor of that room to the cellar below. There was the root cellar there, a bed, some trunks, and other items. Our parents would sleep in there when we visited in the summer, it was too cold, I think, to sleep there in the winter. How we would play this game, Carrom, that hurt our fingers when we would thump the red and green rings across the board, but we enjoyed playing it.

I told about the garage that we would get the twine and l learned to braid there. One time we had made quite a mess and grandpa told us he wasn’t happy about it, but went and told our parents to take care of it and they came out and scolded us and had us clean it up. We knew better and we knew that grandpa liked his garage uncluttered.

Then there was the little bridge that went across the ditch to the mail box. There was an

arbor on one side of it, they were painted white. My sister and brother and I would be allowed to get some bamboo poles from grandpas garage and tie a twine to one end. We knew there were not fish in the ditch, but we let our imaginations take us to larger than life fish stories.

The willow trees that were huge, one time had to be cut back because it was a bad year for the trees, but a good year for the web worms to infest them. It was sad, but they grew back and provided plenty of shade and beauty.

Then there was the inside of the house, the little red chair that every grandkid had to sit in. and the one hide-a-bed couch and the recliner that was Grandpas, and grandma’s rocking chair and the tv. The dining room had a built in display cabinet with drawers 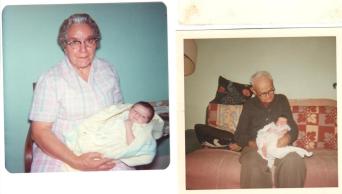 under the counter, for grandma’s best plates and serving ware. The linens were in  the drawers and these were only used when we all gathered together. She had her pedal sewing machine in the corner and there was a row of windows on one wall with curtains that just covered the lower quarter of them. The b 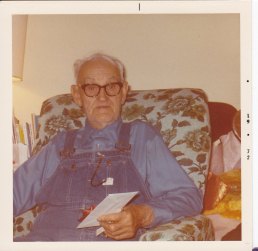 reeze that blew in was gentle and only opened when it was not strong. That big dining table where we all sat around. Then there was the small kitchen with a little round table and two chairs, that they used when it was just the two of them there. The claw foot bathtub and their room, that you didn’t go in unless invited, it was their quiet space. The other two rooms that cast scary shadows on the walls at night, but we always felt safe under the handmade quilts.

I talked about how sad my grandfather was when we buried my grandmother. I had never seem him so distraught before and my heart ached for him.

I was glad to see the neighbors red barn was still there, that place looked the same. It made my heart lighter to see it and remember more memories to share about visiting grandma and grandpas home.

The stories can go on, and these are just of few of my memories, my cousins, who lived nearby, have so many different memories. I spoke with one of my cousins about being there and how us kids always wished we could have lived nearby all our relatives. She said that they really didn’t see each other that much, except when family came to visit and then everyone would get together. I thought that was so sad, to be so close and not see each other but a few times a year. Even now the memories are so fresh in my mind and again my heart aches for my grandparents and family that have passed on.

Now we are the old folks that are telling the stories of our youth. We are the grandpas and grandmas and aunts and uncles that are making memories with our children and grandchildren.

Oh, and by the way, yes the yard is oh so much smaller than what I remember it being as a kid.

Thanks for the wonderful memories, grandma and grandpa. We all miss you so very much. Thank you for teaching us about real love and kindness, so that we could teach our children and grandchildren.

Starting in 1970, the experience and journey has created well-seasoned researching techniques. Current and active participation in continuing education, staying up to date with technology, and including weekly contact with other professional genealogists: including family historians, genealogy clubs and historical societies, keeps the knowledge and ongoing learning in an ever changing world up to date. View more posts

This site uses Akismet to reduce spam. Learn how your comment data is processed.